Filtering the noise with stability selection

Embedded methods are a catch-all group of techniques that perform feature selection as part of the model construction process. They typically take the interaction between feature subset search and the learning algorithm into account, at the cost of extra computational time.

Stability selection1 wraps around an existing structure learning algorithm, and tries to enhance and improve it. The goal of these kind of algorithms is to learn the underlying relationships of the data. Structure learning can take different forms, but one example is the LASSO algorithm for supervised regression. Here, the algorithm tries to determine which features relate to the target variable, and the (covariance) structure is then defined as the set of features with non-zero values for their coefficients in the final linear model.

Other examples of such structure learning algorithms are:

What these structure learning algorithms typically have in common is a parameter \(\lambda \in \Lambda\) that controls the amount of regularisation, mentioned above within the parentheses. For every value of \(\lambda\), we can obtain a structure estimate \(\hat{S}^{\lambda} \subseteq \{1, \ldots, p\}\), that indicates which features to select. Here, \(p\) is the total number of available features, the dimensionality of our problem.

The rough idea behind stability selection is to inject more noise into the original problem by generating bootstrap samples of the data, and to use a base structure learning algorithm to find out which features are important in every sampled version of the data.

For a feature to be considered stable (or important), it has to be selected in a high number of perturbed versions of the original problem. This tends to filter out features that are only weakly related to the target variables, because the additional noise introduced by the bootstrapping breaks that weak relationship.

To make the above more precise, we have to dive into the mathematical details. The algorithm takes as input a grid of regularization parameters \(\Lambda\), and the number of subsamples \(N\) that need to be generated. Stability selection returns a selection probability \(\hat{\Pi}^\lambda_k\) for every value \(\lambda \in \Lambda\) and for every feature \(k\), and the set of stable features \(\hat{S}^{\text{stable}} \subseteq \{1, \ldots, p\}\).

The algorithm consists of two steps. In the sampling step the selection probabilities, or stability scores, are computed as follows. For each value \(\lambda \in \Lambda\) do:

where \(\pi_\text{thr}\) is a predefined threshold. The algorithm is also represented in the following diagram

The base algorithm is run on every bootstrap sample for a grid of values of the penalization parameter, and not just a single value. A-priori we don’t know what the right level of regularization for a problem is. If a variable is related to the target variable in a meaningful way, it should show up in most bootstrap samples for at least one value of the penalization parameter.

When the stability score for a variable exceeds the threshold \(\pi_\text{thr}\) for one value in \(\Lambda\), it is deemed stable. This means that some regularization is necessary. In specific cases one can obtain minimum bounds (as obtained in the Meinshausen and Buhlmann paper), but in general this requires some fiddling around with the mathematical details.

Implementing it in Python

Stability selection is actually relatively straightforward to implement. If you have an implementation of the base learner available, the algorithm can wrap around that and it is only necessary to write the bootstrapping and scoring code. Both of these two steps don’t require sophisticated mathematics. Roughly speaking, an implementation could look as follows: 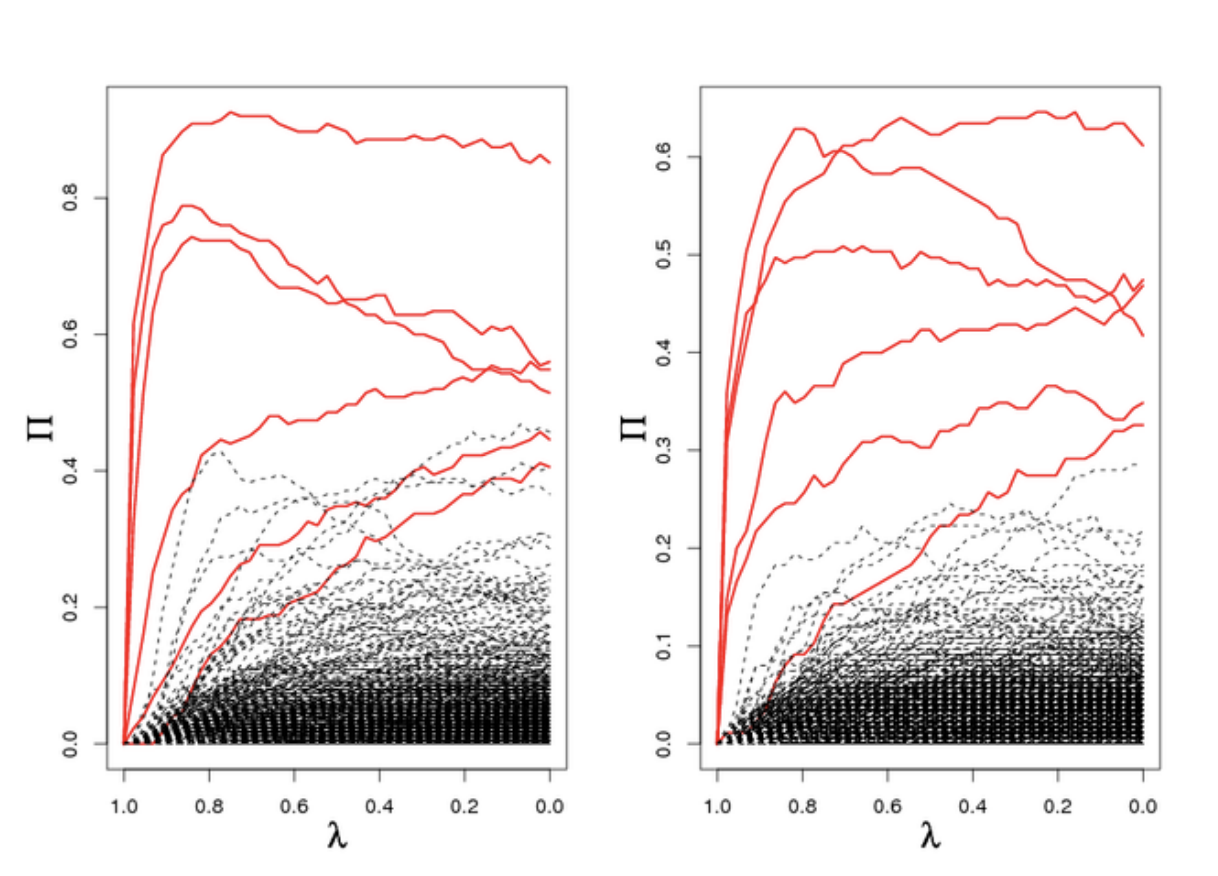 The above figure is taken from the original stability selection paper1. It can be used to understand how stable the scores are, and can also help distinguish which variables are more important, within the set of selected variables.

Note that there are some bells and whistles that can be added to an implementation of stability selection:

Stability selection has proven highly effective in some of the problems I have dealt with. In this post I have skipped over some details, but the papers cited contain more motivations and theoretical guarantees behind the algorithm. The original paper1 is also interesting because they propose to inject even more noise into the problem, by using a learner called the randomised LASSO that essentially takes a random value \(\lambda \in \Lambda\). The details in this post should give you enough to start using this method in your work, but do read the references for the interesting stuff!